A 53-foot one-off fast bluewater sailing yacht. The essence of 10 years search for the dream yacht! 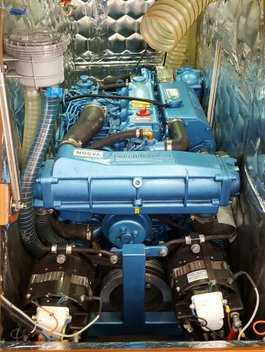 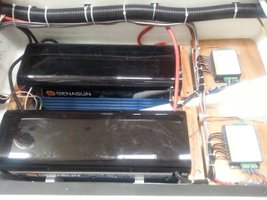 Propulsion engine and DC generator in one

It was a requirement not to have a separate generator on board (for good reasons!, see description of Electrical system below), but rather use the propulsion engine for powerful electrical generation as well. Thus, a Nanni engine was chosen because it was possible to have it delivered with a special frame to support two large 24V alternators. Neither Volvo Penta nor Yanmar were able to offer this. Nanni is based on Kubota engines, one of the most used diesel engines in the world, used in industrial, agricultural, and construction applications world wide, guaranteeing the best in reliability and spare parts availability. The N4.115 model on Cheetah is a large displacement (4.0 liter) low rpm (2600) engine with turbo and intercooler, offering very smooth low vibration running and good fuel economy. 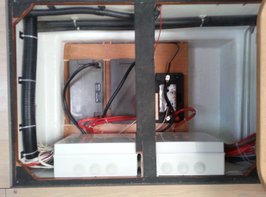 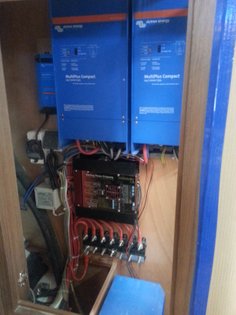 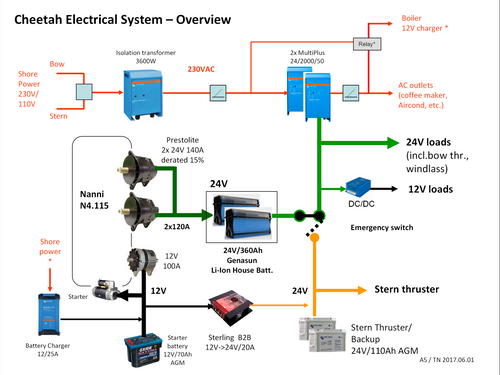 The boat has a carefully designed very powerful electrical system, capable of running air conditioning and watermaker without the need for a separate diesel generator. Instead, there are two large 24V brushless fire truck alternators with a 73% efficiency directly on the engine that produces 6kW of direct charging of two large house banks of Lithium batteries (9kWh total capacity). Two 2kW inverters in parallel supply abundant of 230VAC power to run air conditioning and household appliances like a Nespresso coffee machine, toaster, water kettle and vacuum cleaner. So not only is there complete redundancy in having duplicate alternators, batteries and inverters, but also a huge weight saving of appr. 5-600kgs by eliminating the need for a generator and large banks of lead acid batteries as in traditional systems. The watermaker is also very energy efficient and runs directly off 24VDC.

The direct DC charging of Lithium LiFePO4 batteries from the alternators is offering another huge benefit in terms of much reduced charging time compared to typical systems. On Cheetah, a depleted house battery (in practice appr. 20% state of charge – SOC) can be topped up to close to 100% SOC with a 1hr15m run of the engine at 1000rpm, or 2x 30min per 24hrs when on a passage. On other boats with a typical generator that produces 230VAC this must be converted to DC through a battery charger, limiting the charging power to a fraction of the output of the generator. And the poor charge acceptance rate of lead acid batteries limits charging further, resulting in as much as four times longer charging times, with the nuisance of noise and exhaust smell from the generator for hours and hours, and extra maintenance of a 2nd diesel engine.

The Lithium house bank powers all major systems on board, including the bow thruster, windlass, headsail furler and hydraulic power pack. The very stiff voltage (little drop at high load) of Li-ion makes this possible without the use of separate bow buffer batteries as found in traditional setups, simplifying the installation and saving weight.

However, there is in addition a 24V 110Ah AGM bank that can be engaged with a switch to act as an emergency power source in case of power failure of the Lithium batteries (eg. due to a lightning strike that could harm the electronics in the Battery Management System). This AGM bank powers the stern thruster in normal operation, and is charged from the 12V 100A alternator that comes standard with the Nanni engine, via a 12-24V Battery-to-battery charger. This 12V alternator is also used to charge a dedicated 12V engine starter battery.

At right is an overview of the electrical system. 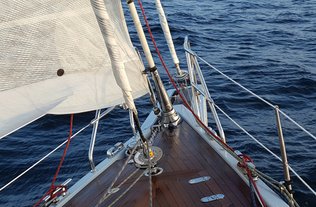 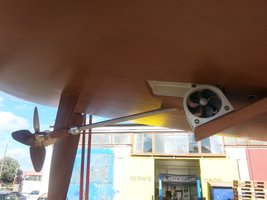 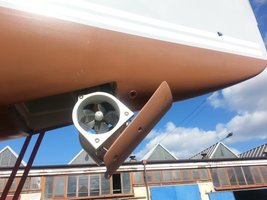